Gerardine Wurzburg is the owner of State of the Art, Inc. Over the last twenty – five years, she has developed media on current topics and trends in health, education, contemporary history, and social justice. Her work is released theatrically and broadcast nationally on HBO, CNN, PBS, and ABC and internationally as well as being distributed to extensive non-broadcast audiences. In addition to the many awards Ms. Wurzburg has received over the years, she is the recipient of the Academy Award® and the Japan Prize. Ms. Wurzburg is also a member of the Academy of Motion Picture Arts & Sciences, the Academy of Television Arts & Sciences and the American Public Health Association. 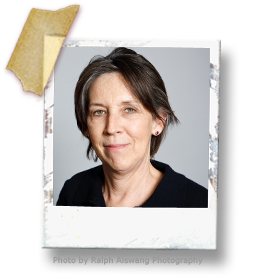 Larry Bissonnette is an advocate and artist who lives in Milton, Vermont and has had his work exhibited regularly both locally and nationally. Larry is one of the featured artists of the GRACE (Grass Roots Art and Community Effort) project based in Hardwick, Vermont. In 1991, Larry learned to communicate through typing and began combining words with his art to express his thoughts and ideas. Over the past 15 years, he has been a featured presenter at many educational conferences and has written and spoken on the topics of autism, communication and art.

Tracy Thresher is an advocate for people with disabilities. He lives and works in Vermont. Tracy began typing to communicate in 1990 and was one of the first individuals with autism at Washington County Mental Health Services (a community-based service provider) to be introduced to it. He has presented at local, statewide, and national workshops and conferences. He has consulted with local schools, is a member of the Vermont Statewide Standing Committee and has worked for the Green Mountain Self-Advocates in Montpelier, Vermont. In Vermont, he mentors teenagers and adults. Most recently, Tracy has consulted at Syracuse University as a lead trainer.

Pascal Cheng has assisted Larry Bissonnette in his writings and presentations about art and disability issues since 1991. Pascal has an M.Ed. and a C.A.S. in Special Education from the University of Vermont.

Harvey F. Lavoy has assisted Tracy Thresher in his advocacy work since 1994. Harvey has worked for Community Developmental Services (CDS), a division of Washington County Mental Health Services in Montpelier, Vermont since 1994.
<< Previous Session | Next Session >>